Two men and an Ostrich

Quintus Enslin recalls an afternoon in the African bush not long ago, when he and his Italian employer had a close encounter with a rather angry ostrich.

I am based at Leobo Private Reserve in the Waterberg, three hours north of Johannesburg.

One beautiful summer's morning, an Italian friend and I went for a walk in the bush. 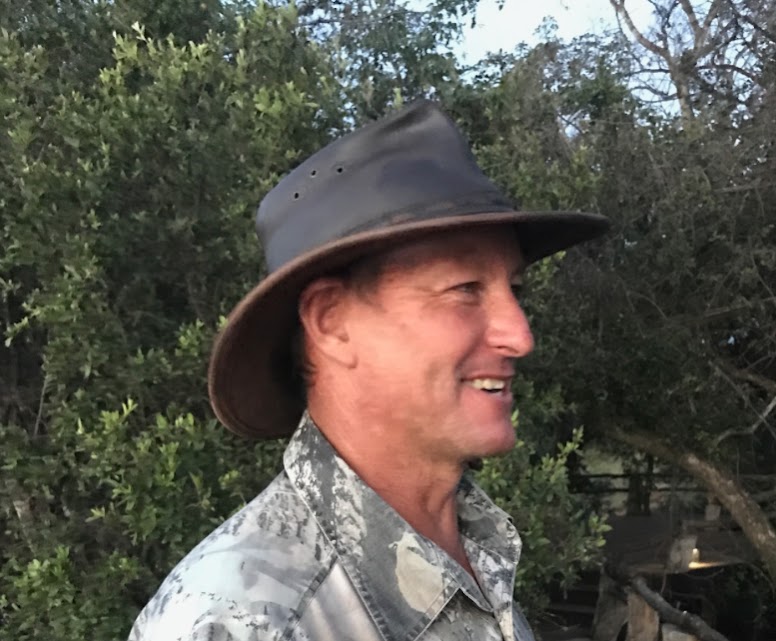 It was a great morning and we saw almost everything. From zebra to kudu to giraffe, warthog, blue wildebeest and more. About halfway through our walk, I spotted an Ostrich, or let me rather say, I first spotted the red legs of the Ostrich, then the Ostrich.

Now for those that don't know, red legs mean it is breeding season and the Ostrich males are showing off with their red legs and they are much more aggressive during this time.

This is the conversation that followed between me and an Italian guest…we’ll call him Alex.

Me, looking around to Alex:

Me: There is an Ostrich with red legs checking us out.

Alex: Let's get into a tree.

Me: No, don't worry we will keep an eye on him. 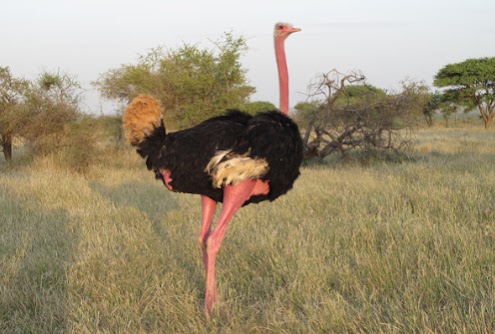 We continue walking and the Ostrich started walking towards us. At about 50m from us, the Ostrich stopped and made a roaring sound coming from his stomach.

Alex: Let's get into the rocks.

Me: It is still OK, let's keep walking.

As we continued the Ostrich caught up with us and started walking with us. About 10m parallel with us.

Me: Just ignore him.

As we carried on Alex started throwing sticks and rocks towards the Ostrich.

Alex: Yes but it can not walk here.

Me: Just leave it alone.

We continue and Alex keeps on throwing rocks and sticks.

We continue and Alex keeps on throwing rocks and sticks

Me: Alex you need to leave that Ostrich alone it is going to hurt us.

Walking in a footpath I saw a long straight stick with a nice ‘V' in the front laying next to the footpath. I pick it up thinking to myself that we might need this if Alex doesn't listen now. Behind me Alex was still busy with the Ostrich. About 40m from where I picked up the stick, there was a long piece of wire lying in the bush. I stopped and gave the stick to Alex.

Me: Take this in case, we might need it.

I started rolling the wire.

The Ostrich ran away and Alex come walking back as if he had won the battle. The Ostrich turn around and walk toward us again.

Me: Leave that Ostrich alone.

For a second time Alex chased of the Ostrich and come back very proud of himself, but so did the Ostrich.

Me: Alex, now will be a good time to back off. That bird is going to hurt us.

For a third time, Alex stormed the Ostrich. This time the Ostrich stood its ground.

This time Alex turned around and not looking as brave as before, he said: Oh Shit. It is not running any more.

Me: Please leave that Ostrich alone.

Alex tried once more. The next moment the Ostrich came for him. He let go of the stick in mid-air and turned to run, but before he could put the one foot before the next, the Ostrich flattened him to the ground and ran over him. The Ostrich turned around and started trampling him.

At this stage, I realised the fight is on and I will have to help. I grabbed the stick and started running towards the fight. The Ostrich looks up and saw me coming and was more than willing to take me on as well.

With the long stick, I struggled to get a hit in and all l could do was to grab hold of the Ostrich's neck. The Ostrich ran right over me and with me hanging onto its neck, it flip-flopped me into a bush, where I lost my grip. God it was strong. 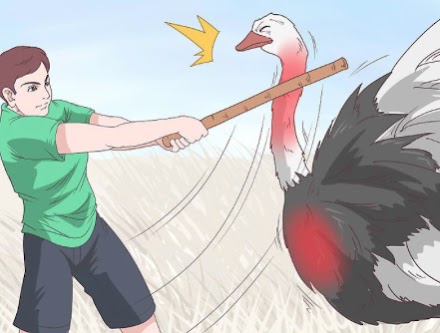 It turns around and come again. Again I am tangled up and cannot get a swing at the Ostrich. My only plan is to grab the neck again.

I didn’t want to shoot him, he’d done nothing wrong, but we were in serious danger - it was self-preservation.

With the second grab of the neck, the Ostrich flipped me out of the bush I was in. It ran over me, turned around and came again.

Alex got up from the ground, still shouting "SHOOOOT HIM!”.

Me: I never had the gun.

Alex dived into the bush where he had lost the gun and as he got up he started loading his rifle, saying. "YOU WILL NOT DO THAT TO ME!”

I shouted, “DO NOT SHOOT IT! Give it a warning!" 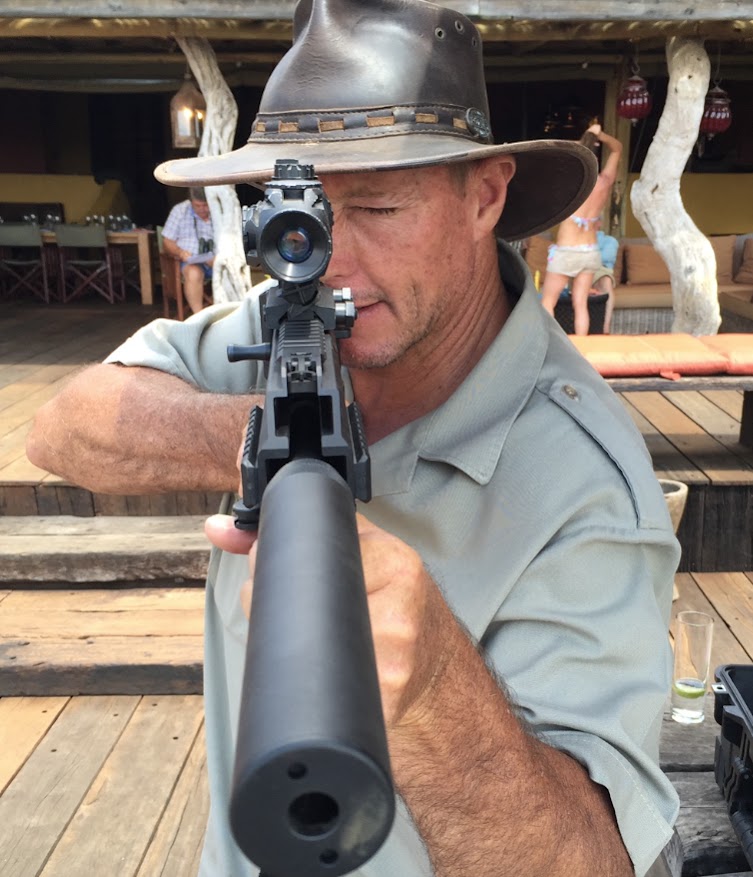 Alex had shot at the feet of the Ostrich. The Ostrich flinched, realised he how close he was to fighting his final fight. It turned around, looked back in anger as it trotted off slowly and resentfully and went on his way.

Thank god! We were battered and bruised, but safe.

As I turned around, I could not help laughing. There was a dust cloud hanging in the bush, both our hats was laying in the sand. We were covered in dust and the Italian's honour was broken.

Three days later, there was a perfect Ostrich footprint on the ass of the Italian looking like a bushman painting! He’d learned a lesson.

One day in the bush I will never forget. 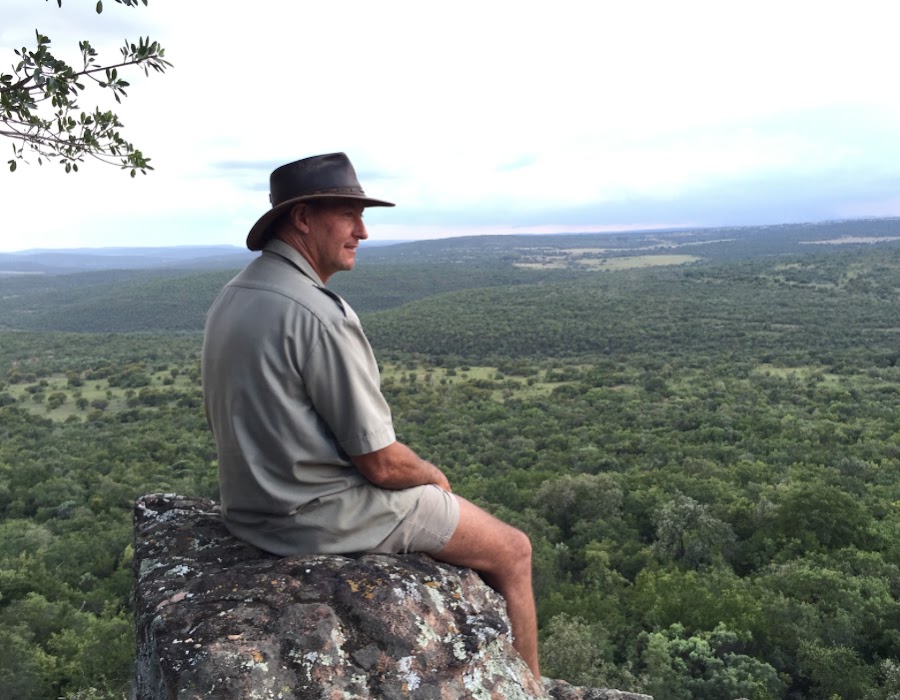